There’s nothing worse than spending an hour or longer styling and photographing a flat lay scene and leaving the session with only one image to your name. Who can relate? (Sheepishly raises hand.)

I used to go into a shoot with a one-track mind. I had my eyes focused on a specific image that I wanted to create and figured that once I created that image, I was done. I could put it in my portfolio and move on to the next shoot. After all, I’m not going to put a ton of different photos from one shoot in my portfolio because then my portfolio would lack diversity, right? However, I soon realized that I was doing myself a disservice by following that approach.

But, that doesn’t have to be your story. With a little preparation and willingness to stay open to flow in the moment, you can leave the session with multiple images. Why is that important? Well, it allows you to create a library of images for various needs as part of your business’s visual strategy. By the time you are done, you will not only have images for your portfolio, but for Instagram, your blog, newsletter, marketing materials, Pinterest, and so much more. This can help to grow your business.

Here’s my approach to creating at least 4-5 flat lay images during a single photo shoot.

Start with the hero image

When I go into a flat lay photo shoot, I always start with the image that I initially visualized for the specific content purpose. This is because (1) it is relatively easy to create due to my pre-production process and (2) I don’t want the food to “die” on set before I get THE shot; in other words, I want the food (or product) to look its best.

As part of my pre-production process, I plan out as many things about the shoot as possible. For example, I create a mood board with inspiration images, a color palette, potential props, and surfaces. In addition, I create a shot list of different images to create, including angles, orientation, and composition. That shot list starts as a brain dump and ends as a list of the most compelling images listed in the order in which I intend to create them. Occasionally, I will also sketch out different images in advance to expedite the session on shoot day.

What determines the image creation order is which image best communicates the story that I want to tell. Which image will best highlight the food or product? That image becomes my hero image.

Starting with the hero image ensures that the star food or product looks its best and hasn’t started wilting, turning brown, or melting (if it is a food item) while I take less important shots. Also, once I nail my most important shot, it takes the stress off and I feel freer to explore other compositions.

Create slight variations by swapping items in and out

Next, I explore variations to the hero image. At times, the changes are slight and at other times they are quite drastic. This might mean re-composing the scene by moving objects to different locations on my surface or swapping one prop for another. In the image below, I decided to replace the bowl of bread with a cookie sheet with bread on it. Doing so not only gave the image a fresh look; it also gave the viewers more of a sense of how the dish was made. The berry bruschetta was created by baking the bread in the oven to give it a toasty color and texture. In addition, I rearranged the other props, making sure that I balanced the colors in the image.

Move objects to the edges to leave negative space

As part of the process of exploring alternate compositions for my flat lay photos, I always like to create an image with negative space. Negative space is space that is left empty in a photo. Some people also call it “white space.” This look is achieved by pushing props to the edges of the frame. Although the space is left free of props during the photo shoot, often that negative space gets filled with text for its final usage. Imagine a magazine or a cookbook that has a beautiful image of the finished dish with the recipe typed in the empty space of the image. However, negative space isn’t just for magazines and books. You can also include an inspirational quote in that negative space or your blog post title on your website.

Many of us have a favorite orientation for our photos, depending on the subject we are photographing and our intended usage. As a beginning portrait photographer early in my journey, I almost always photographed families in landscape orientation. When Instagram came on the scene, I started thinking solely about a square crop. Then, I started leaning towards portrait orientation because it worked both for Instagram and Pinterest. To be honest, I still favor portrait orientation for my flat lay photos. But, I am working on being cognizant of this tendency and including more landscape or horizontal images in my shoots. Landscape images work great as website headers, with or without negative space. They also can  become great backgrounds for slide presentations.

Start wide and then get closer

After getting as much variation as possible using the same lens, I switch to a telephoto lens to get closer to my subject. My favorite lenses for that purpose are the 85mm and 100mm macro lenses. If you don’t have a telephoto lens, you can physically get closer to your subject. The latter approach assumes that you keep in mind the minimum focusing distance of your lens to ensure that you can still lock focus on your subject to capture the texture and details in your image.

Once I get all of the shots that I want with a pristine scene, I start to dig in and make a bit of a mess. This might entail me biting into the food or breaking it up to add a human element as if someone was there. I save this image or series of images until the end in case I don’t like the result of the food being disturbed. For example, sometimes the bite isn’t quite “right.” Also, sometimes creating a “mess”…well…creates a mess. While you may have intentionally placed crumbs or bits of food in certain places, there are times when spills are unintentional. If you aren’t using a surface that can wipe clean, then you will have to spend time in Photoshop cleaning up the background.

The last thing I do is switch up the flat lay surface. Often, the result is an image that looks to be completely from a different shoot. It is a great way to get a fresh look and create a totally different vibe, especially if the background is an opposite style from the original. Here, I chose to place the dish on a brightly colored, solid background. It gave the image a fun, springtime vibe.

I’d love to hear in the comments how you make the most of your flat lay photo shoots.

Also, if you’d like to learn more about flat lays, I am speaking at the Master the Art of Food Photography Summit on June 9, 2021. My topic is 7 Ways (Other than Layering) to Create Depth in Your Flat Lays. You can grab your free ticket here. 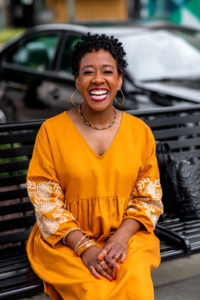 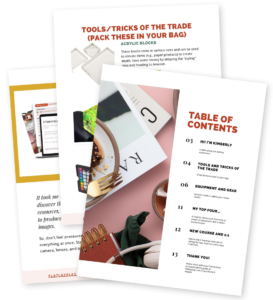 Take the guesswork out of flat lay prep with a free tool kit. 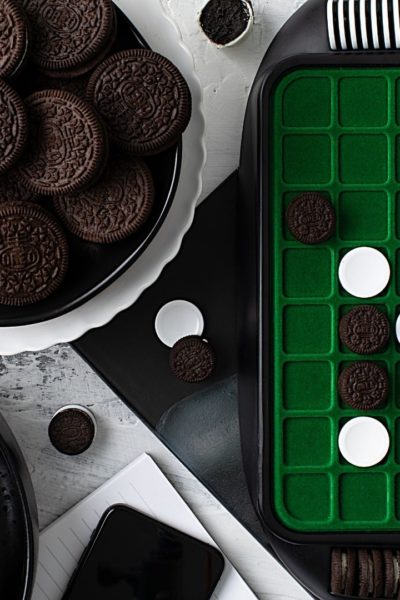 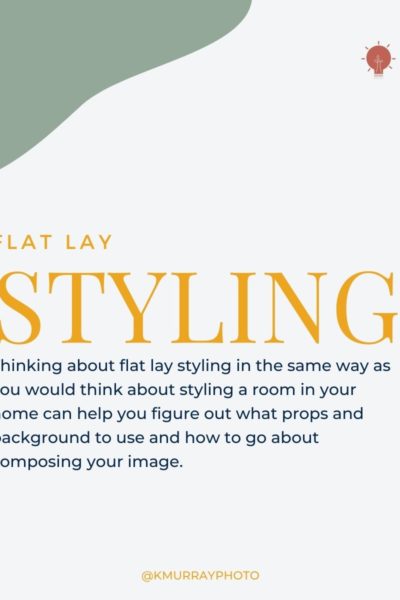 Flat Lay Laws to Live By…That You Already Do! 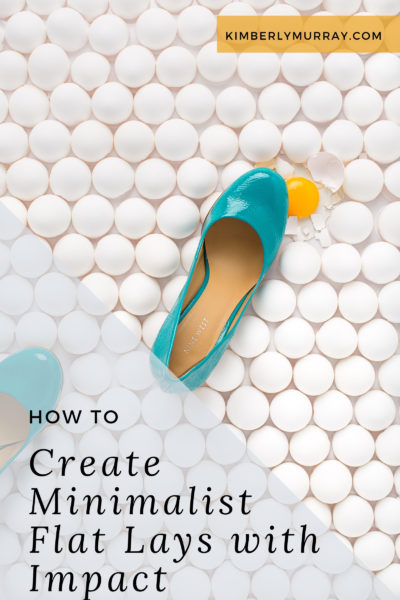 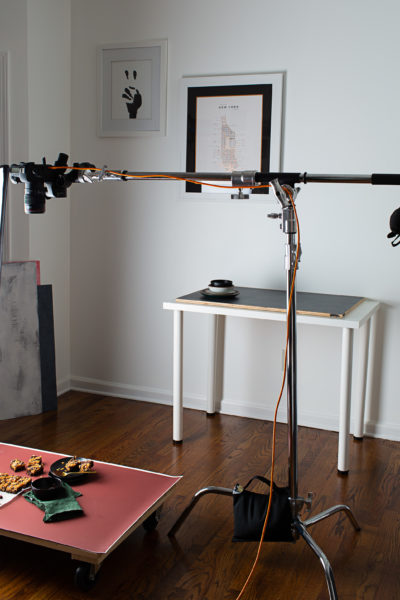 C-stand Tips For Flat Lay Photography: How To Guide 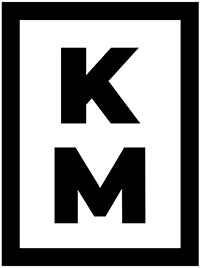 Stay in the Know!